After assuming office several months ago, the former deputy President of the ZANU party Emmerson Mnangagwa seeks legitimacy from new elections held July 30th, and sanctions put in place by some western powers in response to Mugabe’s land reform policies in that country. 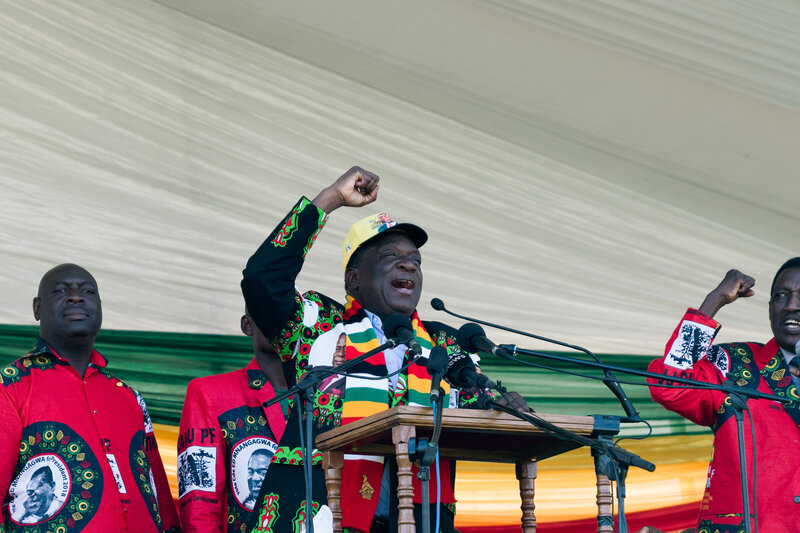 President Emmerson Mnangagwa gives a speech at the ZANU-PF rally at the White City Stadium in Bulawayo, Zimbabwe Saturday. Shortly after his speech ended, there was an explosion. Claire Harbage/NPR

Mnangagwa came into power last November after divisions in the ZANU-PF party caused massive upheaval. Weeks of political chaos led former President Robert Mugabe to resign after 37 years in office.
The results of the elections may not be known for days yet even though the leader of the

On the other side of the coin the head of the largest opposition party, the Movement  for Democratic Change (MDC) party,40-year-old Nelson Chamisa  has tweeted that he has already won the elections, though the Zimbabwe Election Commission(ZEC) has not announced a winner and has cautioned candidates in the elections not to make any announcements until (ZEC) has certified the election results.

The next three days should be a tense wait as Zimbwebians hungry for a different approach wait to see whether their vote will truly reflect their intentions when they entered the polling booths.
Let’s hear what young Nelson Camisa has to say about his vision for Zimbabwe post-Robert Mugabe.