Crowds of residents lined up outside the Durham, North Carolina detention facility on Thursday to turn themselves in after activists toppled a Confederate statue in the city earlier in the week. According to The Fader, the group was attempting to get charges against the activists, including Takiyah Thompson, dropped.

“It was a community all together who did that—who was responsible for that toppling of racism,” said Lamont Lilly, activist and Workers World Party (WWP) vice presidential candidate, in a speech to the crowd. “Very often it does take one person to be the spark, to be the initiator like Bree Newsome [who removed the Confederate flag from the South Carolina statehouse grounds in 2015]. But it takes a movement, it takes a mass of people to support that and keep the movement sustainable.”

Although reports stated that there were over 100 people at the detention facility, most were there to simply turn themselves in “symbolically“, in support of three activists directly connected to the toppling. According to The Herald Sun, two of the activists were identified as 37-year-old Elena Everett and 24-year-old  Aaron Caldwell. The third person’s name was not immediately available. 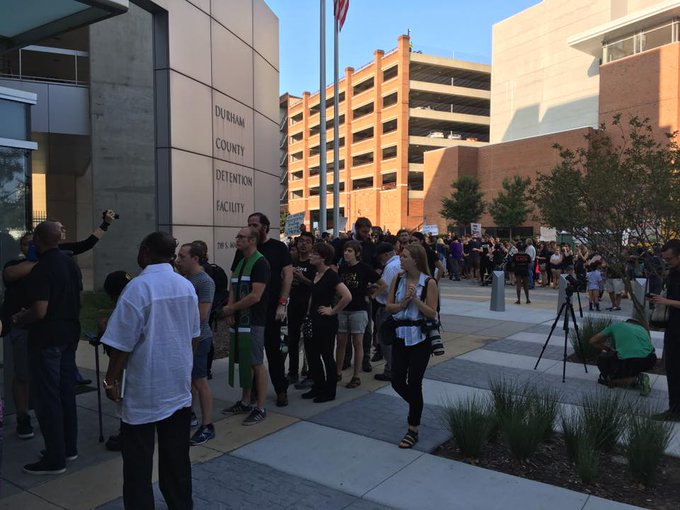 Wow! Line of residents in Durham, NC attempting to turn themselves in for ‘crime’ of removing Confederate Monuments

Thompson, 22, was arrested on Tuesday evening, after a WWP press conferencein which she claimed that she had done the “right thing” in removing the statue, called the Confederate Soldiers Monument, and demanded amnesty for all involved.

“Everyone who was there—the people did the right thing,” she said. “The people will continue to keep making the right choices until every Confederate statue is gone until white supremacy is gone. That statue is where it belongs. It needs to be in the garbage. … That statue glorifies the conditions that oppressed people live in and it had to go.”

Three others were also arrested on Wednesday in connection with the toppling. The activists, 36-year-old Peter Gull Gilbert, 35-year-old Dante Emmanuel Strobino, and 24-year-old Ngoc Loan Tran, had been attending Thompson’s court hearing at the time.

On Thursday, authorities barred the public from attending Everett, Caldwell, and the third unnamed activist’s court hearing. Charges against them were not immediately available. Previous charges against the four other activists included disorderly conduct by injury of a statue and damage to real property—both misdemeanors—as well as participation in a riot and inciting others to riot, which are felonies.

So far, the activists remain undeterred. “We are following a historical legacy of standing up to the powers that be, to this racist, fascist systems, and we’re on the right side of history,” Tran said on Wednesday. “We’re not going to let the police or this jail intimidate us.”